Skin disorders affect children and adults. Atopic dermatitis is most prevalent in children with increasing frequency. (1) Other disabling skin disorders, such psoriasis, urticaria and acne are often present in adulthood. All these diseases may have different causes and may have a genetic component. But it seems that the purely genetic factor is less important than the epigenetics (2). Triggers are environmental toxins, chemicals, heavy metals and food! Diet has an important role to play in many skin disorders.(3) 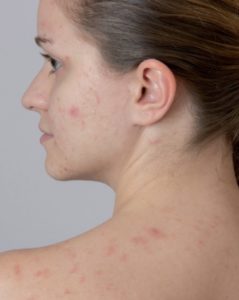 All skin diseases cited above implicate the immune system. It is assumed that type 1 allergy plays a major role, but recent studies show up to 20% of the cases are non-IgE mediated allergies (4). While IgE-mediated allergic skin disorders appear immediately after contact with the allergen, IgG mediated sensitivity is delayed from hours up to days, making it extremely difficult to identify the culprit. Because the symptoms lack specificity, patient self-diagnosis is difficult.

As a consequence, often these symptoms tend to become chronic. Dermatological disorders should always be addressed as a complex immunological disorder implicating many cellular and humoral components of the immune system. Blood levels of IgE, IgA, IgG, eosinophils, lymphocytes, neutrophils and complements pathophysiologically correlate with eczema severity. (5) Particularly, if IgE mediated allergies can be excluded, IgG mediated food hypersensitivities should be investigated. A study published in 2017, reported a strong impact of IgG mediated hypersensitivity in patients suffering from urticarial (hives), eczema and atopic dermatitis compared to healthy controls. (6)

IgG mediated hypersensitivity may occur at all ages. Food hypersensitivity is typically caused by a variety of foods rather than by a single food and can cause multi-system discomfort, including gastrointestinal irritation, eczema, dermatitis, and migraines, although individual specific symptoms may only be caused by a few IgG positive foods. Acne and Dermatitis herpetiformis for instance is primarily caused by gluten hypersensitivity. Some studies suggest that eggs, dairy and soybean are involved skin disorders in children. This is not surprising as these allergens are also the most positive reactions seen in adults. As IgG mediated hypersensitivity is a growing concern in the western societies and due to trans-placental transmission of IgG from the mother to the baby, babies tend to suffer more from skin related disorders. Another study suggests that IgG reactions to beef derived antigens play a key role in acne inversa.(7)

Common to all these inflammatory diseases is the infiltration of circulating immune complexes in the tissue and attraction of phagocytic immune cells to destroy the complexes locally, resulting in an inflammatory skin manifestation.

Intervention studies with an elimination diet based on IgG reactive foods are rare. In 2013 a study (8) could show complete healing from hidradenitis suppurativa (acne inversa), an inflammatory, chronic skin disease characterized by recurrent, painful, boil-like lumps (nodules) under the skin, for which up to today, no known cure or a consistently effective treatment is available. (9) 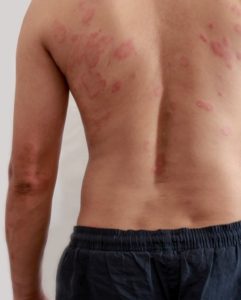 All patients were found to have positive IgG reactions to brewer’s yeast and wheat. Patients were put on a strict 12-month brewer’s yeast free diet. The diet demonstrated immediate stabilization of their clinical symptoms, and the skin lesions regressed over the 12-month treatment period. Similarly, all the patients demonstrated an immediate recurrence of skin lesions following accidental or voluntary consumption of beer or other foods containing brewer‘s yeast or wheat. The patients also demonstrated a return of their quality of life and activities, including the reestablishment of sexual activity in the patients with inguinal and perigenital lesions.

A study from 2010 (7) showed that all allergic patients, including those showing only IgG and IgA antibodies, significantly ameliorated their symptoms, and their levels of beef-specific antibodies were considerably reduced in response to a cow meat exclusion diet.

In observation trials performed with ImuPro, 65% of cases of psoriasis, 73,9% itchy skin, 67,2% atopic eczema, and 67% of acne have significantly improved or disappeared completely. (10,11) The survey showed that those patients strictly following the diet recommendations had the highest improvement of symptoms.

Chronic inflammatory skin diseases are often associated with a genetic predisposition. Environmental factors and food allergies can trigger this genetic polymorphisms to become clinically manifest. IgE mediated type 1 allergy is believed to be the major cause for food related skin disorders. This is particularly true for immediate reactions, but often fails to be responsible for chronic manifestations. In this case IgG mediated food hypersensitivity should be addressed and a diet based on elimination of IgG positive foods should be performed. Some foods tend to be more often positive and responsible trigger in some diseases, but individual reactions prevail and generalized recommendations are not suitable.